Jexper Holmen is a composer intrigued by the extremes. He is known for composing music that fits into three categories: pre-catastrophic, catastrophic and post-catastrophic works. On top of it all, he has a fascination with music boxes. E·S did a quick'n'dirty interview with him about his and accordionist Frode Andersen's latest work Alnitak for 72 participants, 60 music boxes and 12 accordions. The work is premiered on May 26 during one of this month's many festivals, KLANG.

Can you shortly describe the work?

“It is a symphonic work for 60 music boxes and 12 old accordions. Frode Andersen and I have composed the work together and are going to direct and conduct it at the premiere on May 26. The work is called Alnitak. It is the name of a triple star in the constellation Orion. From Earth it looks like one star. The music boxes are this one star, the accordions are the other and us two conductors are the third, but it all melt together as a whole, the same way the light from the triple star does. The name is Arabic and means “belt”.”

Who is the work composed for?

“A mixture of people. The optimum for us is if the 72 participants are a motley assortment of people. People of all ages. You don’t have to be able to play an instrument beforehand to participate. Everyone meets two hours before the concert and is instructed by us. They don’t need to prepare in advance. After one hour and a half of practicing there is a short break and then we perform the work, which is around half an hour long.

First and foremost it is composed for the sake of the music. It isn’t an educational project, but “real” music.”

“Two things: firstly, a music box works in mysterious ways. You can roughly control how much you wind it up, but when it starts to play, it is impossible to know how long it will play. When there is more than one playing at the same time, unpredictable things happen. A lot of music boxes at the same time is kind of creepy. Someone once compared it to ladybirds: one is nice, but in those summers where it swarms of ladybirds, it is rather frightening.

On the other hand, music boxes just sound incredibly beautiful, when there are lots of them. A crackling sound of tiny metal tongues. Accordions also make their sound with metal tongues. That is why the two mix very well together.”

Do you know in your head how it'll sound?

“If I could imagine how it would sound ahead of time, it wouldn’t be that interesting. But I do imagine something. I have a band called Lullabies together with Frode and Ejnar Kanding. We play on 10-12 music boxes at the same time added electronics, so I know the music box sound quite well by now.

But with Alnitak there are a lot more music boxes. In addition to that, they are not processed electronically, so the result is a more naked and natural sound. We have built a small contact microphone for each music box, so you can clearly hear them – as if you were really close to them, even though you’re sitting in the music hall and are a part of the audience. Tomorrow we’re meeting up with Filip Melo, who has built the equipment, and test-drive it. So we’ll probably get an idea about how it’s going to sound.

I think it’s going to sound like nothing else, because it’s so unique. It will probably not be loud. But the fact that so many people and so many instruments are working together gives a fantastic energy.”

What can the audience expect from the concert at KLANG?

“Music they certainly never have heard before. And an immersive feeling of a lot of people’s deep concentration.”

What do you look forward to the most?

“I look forward to the concert the most. It is an ambitious work that has required a lot of preparation. First and foremost, we have composed the work, which isn’t straightforward when it is for instruments that act so unpredictably. Then we had to find out how we were going to amplify the instruments, and we’re still in the midst of collecting music boxes. The festival is in the middle of finding the 72 participants. And on the day, when they arrive, we have only one and a half hours to rehearse the work and then it is the concert.

When the work is finally being performed, the 20-30 minutes it takes will be very intense.”

72 local amateur musicians conducted by the composers Jexper Holmen and Frode Andersen perform Alnitak during KLANG festival on Sunday May 26, 2013 at 3 pm. 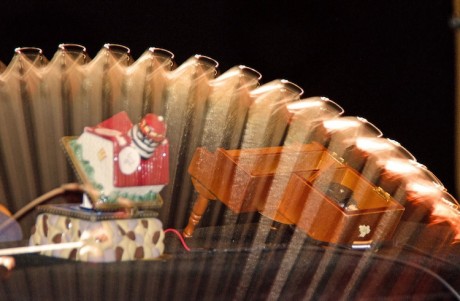