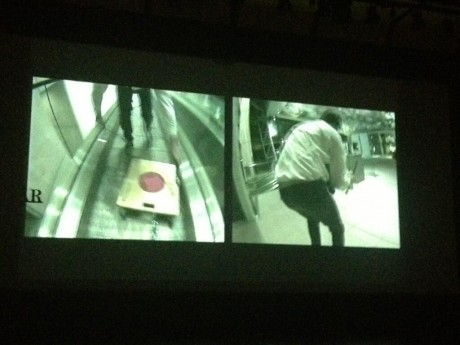 Simon Steen-Andersen is a composer on a quest to expand the realm of music. Aiming for more than a fashionable combination of music and visuals, his excursions into the fields of (live) video, installations and performance design all take their departure from realm of music Simon is so deeply immersed in. The developments of recent years have, as he points out, removed many technical hurdles and made it possible for artists to explore elements of the fields they master – now transposed into neighbouring disciplines. The complexity and specificity of Simon’s projects often demand his presence in the preparation of performances and the fact that he also often takes part in performances himself ensures that he has a packed international travel calendar.

Take the month of March for example: First off in New York with a Carnegie Hall performance of Next To Beside Besides #0+4 followed by Black Box Music with the London Sinfonietta and new versions of his live site-specific video work RunTime Error at the Queen Elizabeth Hall. Paris is the next stop with a performance of his On and Off and To and Fro by the renowned ensemble 2e2m followed by Berlin performances of Amid and Study for String Instrument #1 as well as his hour long instrumental-theatre work Inszenierte Nacht with Trio Recherche at this years März Musik festival. Next on the list is Black Box Music performed by Håkon Stene and the Oslo Sinfonietta in Amsterdam, followed by Tanja Orning’s performance of Study for String Instrument #1 in Oslo. Then a return to London for Next To Beside Besides #0+4 at the London Ear Festival before rounding off with Simon himself taking part in a series of improvisations together with Søren Kærgård at Cafe Oto.

And the list goes on! See our performance calendar for further details: