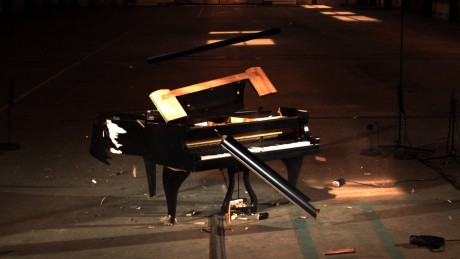 In “Piano Concerto” the perfect, classical grand piano is confronted with a battered, almost completely broken, grand piano in a sort of virtual double concert. The soloist, Nicolas Hodges, sits across from a video doppelgänger playing the damaged instrument that has been dropped onto a concrete floor from a height of 8 metres.

Confronted with the damaged, out of tune piano we see the newly tuned, classical grand piano and symphony orchestra in a new light. The composer insists however that this is not a broken instrument at all – it is a new, revived instrument with an expanded palette of sounds and its own poetry and beauty.

You don’t often see a symphonic concert in Denmark with a programme consisting only of newer works, but at this concert all works are written no more than five years ago. The individual works as well as the concert as a whole relate to the classic symphonic concert, but bring it up to present time. The concert stages, imitates and twists the language, forms and rituals that have been dominant in concert halls worldwide for the past 300 years.

Read more about the concert here.

“Piano Concerto” was premiered by the SWR Symphony Orchestra Baden-Baden and Freiburg at Donaueschinger Musiktage 2014, where Simon Steen-Andersen received the German SWR Orchestra Prize for the composition. He also received the Danish Carl Prize 2015 in the category best orchestra piece.

The critic from Seismograf wrote about the premiere of “Piano Concerto”: “It is visual, spectacular, and a musical material in which the “origin” of the sound is made clear, making sound itself concrete and palpable. A piece that is as technical, virtuosic and impressive as it is direct, accessible and appealing.”