The past week has been a really social week! Not only social for Edition·S, but social for the entire world actually. This week has been dedicated to Social Media Week worldwide and that includes Copenhagen as well. Here at Edition·S – music¬sound¬art we are big fans of social media – have you checked out our Twitter profile? Listened to music on Soundcloud? Are you following our Spotify playlist?

Kat Jarby attended a seminar about music and social media and tweetet this photo: 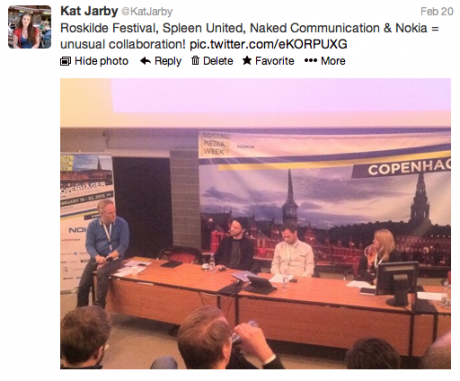 In addition to social media, the week at Edition·S has also been full of social events. We have attended several concerts and hosted our very own composers evening. The new director of Edition·S, Becky Dawson, was introduced to a group of our composers, snacks were eaten and drinks consumed. Very cosy evening indeed! Check out Rudiger Meyer’s photos from the event here. 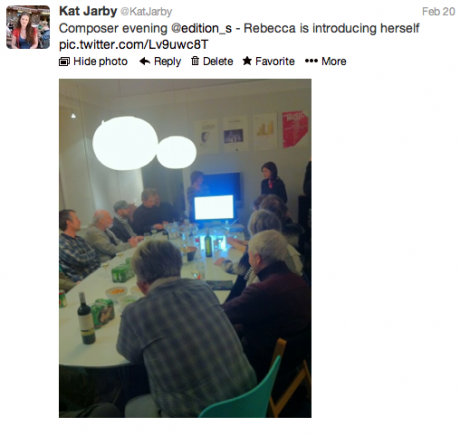 Monday we celebrated Rune Glerup and his success by attending a concert and award ceremony. He was the fortunate receiver of this year’s Bisballe Prize. We were so stunned by Neel Teilmann’s performance of Rune’s Sonata in Seven Movements that we completely forgot to tweet! Shame on us! Anyway, the performance was great, Rune was happy and Fuzzy gave a nice speech.

Last night young composer Simon Løffler invited us all to his debut concert at Literaturhaus. Simon is one of the four DYGONG guys, so we know him quite well. Congrats to Simon!

Next Thursday is a BIG night for Edition·S with performances in New York, Odense and Copenhagen! The Danish newspaper Politiken’s Ibyen recommends Ejnar Kanding at VEGA in Copenhagen. 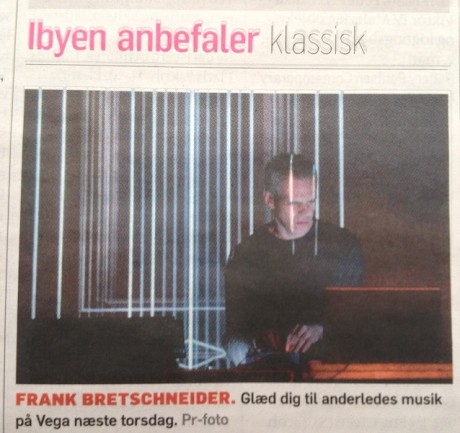 We hope you’ll enjoy your weekend – and see you next Friday!