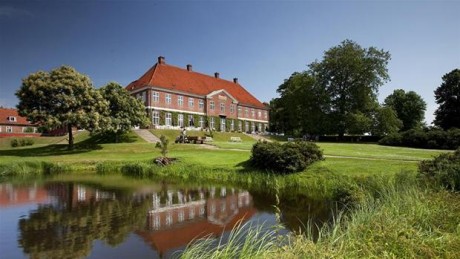 From July 6 to July 16 the 47th season of Hindsgavl Festival takes place.

On July 7 the German Ascolta Ensemble performs Simon Steen-Andersen’s acclaimed “Inszenierte Nacht”, praised at its Danish premiere (at SPOR Festival in May) by the reviewer from Aarhus Stiftstidende as “intense and wildly surprising”.

On July 9 Martin Stauning’s duo “Der Sandmann” for violin and soprano will be premiered. The piece is one of a number of premieres by Stauning this summer. The latest being Ensemble Modern’sperformance of Verdorrte Räume at this years KLANG Festival. The reviewer from the Danish newspaper Information described the piece with these positive words: “The highly concentrated material in Martin Stauning’s Verdorrte Räume(2015) hits us with great power. Rarely does one experience an avantgarde piece in which the ingredients are so few and almost boiled down to a kind of concentrate.”

Hindsgavl Festival also presents the Danish premiere of Rune Glerup’s Clarinet Quintet - still leaning toward Machine, which was successfully premiered earlier this year in France by Quatour Diotima and the clarinetist Alain Billard. The piece has since been played at IRCAM’s prestigiousManiFeste 2015 Festival. The same group of musicians will perform the piece at Hindsgavl Festival on July 12 and 13. The latter concert starts off with an introduction by the composer.