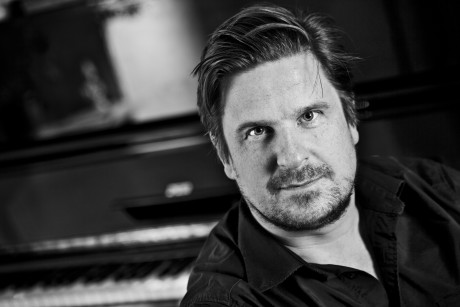 Babel, which was premiered on 7 November 2014 during Wundergrund Festival, is inspired by Argentinian writer Jorge Luis Borges' short story The Library of Babel from 1941. We've asked Steingrimur Rohloff a couple of questions about the piece and about his coming projects.

Why did you pick Borges' Library of Babel as a model for your opera?

I was interested in the short story which describes an infinite space. We have an infinite library and therefore a “fantastic” premise for the framework of the opera. Plus I was curious about the existential and philosophical questions the text raises: Us versus infinity. Borges is a master of reflecting about these subjects and his playful thoughts are pure treats for the audience, I think. In addition to that the short story had an openness that gave me the possibility of focusing on something that I find to be of the utmost importance in modern music theatre: Proper fusions and interactions between the art forms. That's how, for instance, the percussion songs played on books and duets with video doubles came into being. An open material for modern music theatre: That was BABEL.

What's appeals to you in working inside the operatic genre?

I suppose I'm into all art forms. Besides music I’m interested in literature, philosophy, theatre, painting and cinema. That’s why opera, and especially a more comprehensive idea about music theatre, is a dream for me to work with. Which is also why I tend to interfere a bit in the overall production beyond my job as a composer. But I guess that’s what theatre- and opera people really like: working together as a group. Blending the thoughts of several artists into one performance is a magical process.

Which future projects are you working on? A new opera?

I got a large commission from the Norwegian Arctic Sinfonietta, which is almost in the opposite direction of opera. In this piece a classical orchestra becomes a co-player in a theatricalized concert experience. Another new work of mine will be premiered in Konzerthaus Berlin by the German Ensemble LUX NM. In terms of opera I have a few works that are taking shape. Also some that are too early in their development to be properly announced. But to be specific: Next year Lysistrate with Esbjerg Ensemble will be premiered at The Funen Opera. In addition to this I'm working on a miniature children's opera with the children theatre group ZEBU. It's almost the same team with which I won a Reumert in 2009 for The Story of a Mother.

Babel was created as a collaboration between Steingrimur Rohloff, the Athelas Sinfonietta, and librettist Morten Søndergaard.

This year's Reumert will be awarded on 21 June.