Niels Rønsholdt is a composer that likes to turn established ideas on their head. The festival opens with two works going back a few years in Niel's output. Die Wanderin refers to the Romantic notion of the (male) artist finding inspiration during long walks, preferably in nature. In Niel's work the central character is female and the setting is urban. The sound of her stilleto's as she walks the streets, increasingly vulnerable rather than finding strength, forms the sound-backdrop for the piece.

The new chamber orchestra version of Me Quitte, to be premiered on Saturday at the DR Concert Hall, inverts the confident crooning of Jaques Brel's famous chanson Ne Me Quitte Pas into an exercise in true vulnerability in which the composer himself takes to the stage (for this performance with Kira Skov as singing partner). One of the most powerful expressions of romantic love in popular culture is reinterpreted, exposing love’s traces of suffering, degradation, misery and loneliness. The music is itself built on a literal reversal of the original material, with both language and melodies reversed and re-learnt in their new form. 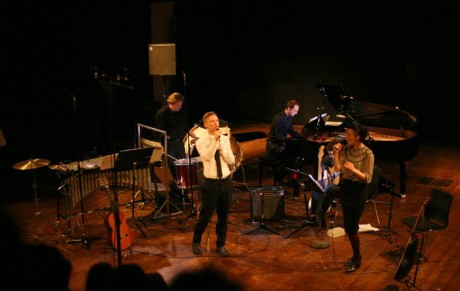 Nicolai Worsaae's Wesenheit ab Wesenheit takes it point of departure in a story about the German prisoner Jörg Meyer, who during the late 70’s was confined to isolation in a Danish prison. The theme of emptiness and isolation run's through a number of Nicolai's Works and as he explained in an interview before the premiere of the work at the Huddersfield Contemporary Music Festival in 2011, this is a space that he doesn't feel has been fully explored or documented, both physically and mentally, in contemporary music.