On July 1, 2013 Klejs & Rønsholdt’s spectacular interactive installation HOME opens at 3LD Art & Technology Center in New York. The installation is the result of a four-week residency, where the artist duo has been working with programmers and technicians from 3LD to create this new work.

HOME consists of a swinging house that in glimpses comes to life with audio and video as it passes the audience. The artist duo Klejs & Rønsholdt is media artist Signe Klejs and composer Niels Rønsholdt. For nearly a decade they have created technologically advanced productions in the field of installations and experimental opera. At their residency at 3LD they produce HOME which concludes the LoveRacer trilogy, the other two being RACER (2011) and SKIN (2012). The first part of the work was developed at a workshop at the Culture Yard in February 2013 together with media artist Mark Coniglio. The Danish premiere takes place at CLICK festival in May 2014. See a preview here.

HOME is produced by Klejs & Rønsholdt in collaboration with 3LD, The Culture Yard and Edition·S – music¬sound¬art with kind support from The Danish Arts Council. 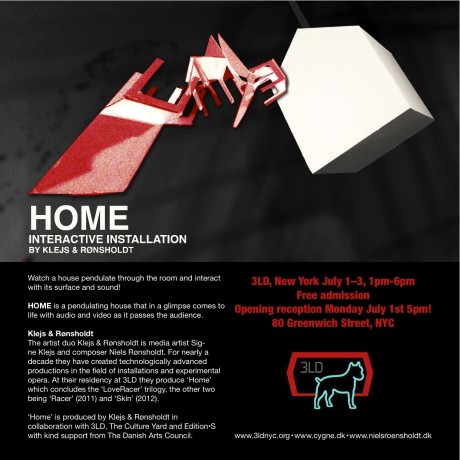 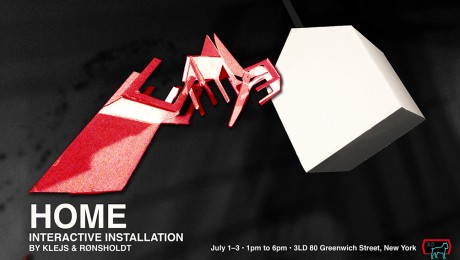