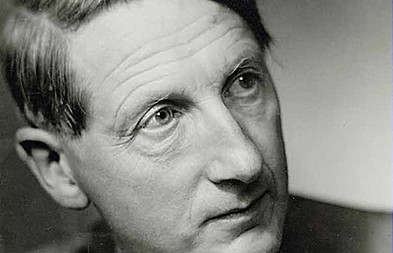 Senior researcher at the The Royal Danish Library Claus Røllum-Larsen has written a two-volume book on Knudåge Riisager’s life and activities as a composer and writer. The book is released by Museum Tusculanum Press.

With great breadth of view and a meticulous use of sources Røllum-Larsen takes the reader through the composer’s early years and the world premiere of his debut work, the String Quartet in C major in 1919, his stay in Paris in the 1920s, his collaborative work with Danish satirist Storm P and his later masterpiece Etudes.

Røllum-Larsen paints a portrait of a dynamic, open-minded composer, who drew on such different inspirations as futurism, children's songs and neoclassicism.

In addition to his carreer as a composer, Riisager obtained a degree in economics and worked as an Assistant Secretary in the Danish Ministry of Finance. He also served as chairman of the Danish Composers’ Society and held the head post at the Royal Danish Academy of Music between 1956 and 1967. Furthermore, Riisager was an excellent and highly productive writer. The breadth and quality of his literary production is unequalled in the history of Danish music.

The book, which is released simultaneously with the launch of a new website on Riisager, provides the reader with an elaborate biograpy along with information on his musical and literary works.