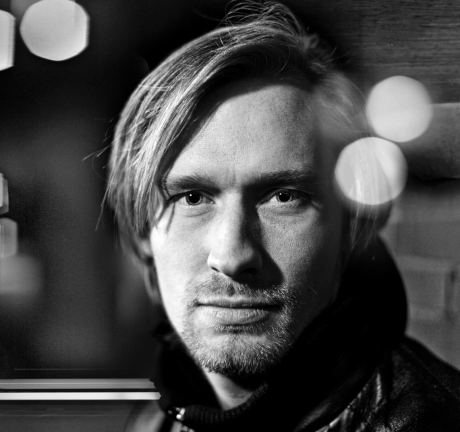 What lies behind the title “Eight And A Half Pint”?

The title refers to a few things. You can divide it into three: Eight, Eight And A Half and A Half Pint. These three aspects represent three different parameters in the piece. Some concrete musical material, an image relating to an artistic process and a reference to the video part of the piece. It sounds strained, but it's actually quite straightforward:
Eight refers to the fact that the piece is built around the first movement of Beethoven's 8th Symphony, which by the way was on the programme for the concert where my piece was premiered. So it's a piece which mirrors itself in Beethoven's symphony and functions in a certain way in this context.
Eight And A Half is a reference to Frederico Fellini's “8 1/2” (one of my favorite movies). The main character is a film director who is having trouble realising his very costly movie project due to either lack of will or inspiration. It's a reference to my own artistic process relating to the creation of the orchestra piece. To write an orchestra piece, which is also a large and very costly machinery and which is in many ways tied to a strong classical tradition, is not easy. Filling the role as an orchestral composer can seem intimidating and perhaps a bit frightening because you know that you're addressing an audience and a group of musicians who expect something quite specific from you.
A Half Pint refers to the more humouristic and ironic tone of the piece, which the video part helps to set. I play the main character who drinks a lot of beer (i.e. pints).

The piece combines a symphony orchestra with a silent movie montage of you and the accordion player Andreas Borregaard. What's the relationship between sound and image?

It's not entirely a one-to-one relationship. Together they just tell a story of sorts. I apply the codes of the silent movie, the intertitles for instance, as an artistic device, which formally strengthens the piece as well as increasing the level of understanding of the otherwise quite blurred video. I imagine the movie to be about a composer who is not making any progress with the process of writing. Instead of staying home and finishing the piece he tries to ignore the threatening deadline by getting drunk. In the video the music is represented by the accordionist (Andreas Borregaard) who plays a non-audible music in slowmotion on this miniature organ or a one-man-band-instrument. The images of him are out of focus and maybe they symbolise exactly what the composer wishes to find his way into: The music as the key for solving the task which is now causing him trouble and a bad conscience.

This is a very square explanation of the relationship between music and video. In the same way as the title is filled with references, the piece in itself is practically a study in intertextuality. I not only quote Beethoven's music, I rearrange and melt it together with some of my own musical noise sounds. This causes a synchronisation of the applied elements and it's this musical “overdubbing”, to stay within the terminological world of cinema, that I especially like.

Pliiinggg has plans, but they're not concrete to a level where I can speak of them right now. We hope to do a concert in the end of 2015 or in 2016.

Eight And A Half Pint will be performed in September during ISCM in Slovenia, but already at the end of May you can hear two of Nicolai's other pieces Kuro ton'neru and “REPLICATION #2” during this year's KLANG Festival in Copenhagen.