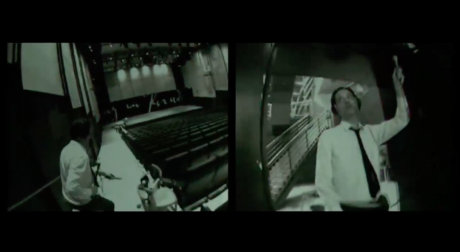 “Run Time Error” is a site specific audio-visual performance, in which Simon Steen-Andersen performs at two levels – in front of the camera in the pre-recorded video sequences, and behind the joysticks when video and sound recordings are sampled in a live performance.

Read much more about "Run Time Error" in our recently published feature article about performing composers.

The opening of Run Time Error takes place in the context of a whole day focusing on composers on stage. The program of the day is arranged by Sanne Krogh Groth who currently does a research project on the subject. Besides from Simon Steen-Andersen’s work, there will be a concert presenting premieres of works written for the occasion by Louise Alenius, Krishve and Juliana Hodkinson. The composers obviously enter the stage themselves – Alenius and Hodkinson are joined by SCENATET.

The concert will be followed by a seminar. Read much more about it here.

Last week, on September 8th, a brand new ensemble version of Run Time Error was premiered. The new version written for Ensemble Modern was performed at the opening of Klangspuren Festival in Schwaz, Austria.