A charming prelude to the Biennale, that contrasts Danish lightness of the New against the heaviness of the "German" classical spirit and shows how to much fun New Music can be.

So concludes a review of Athelas' opening concert of the Chiffren Bienale in the Kieler Nachrichten. 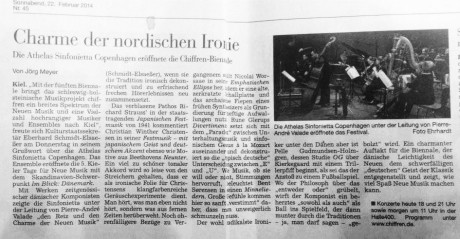 In an interview the artistic director of the festival, Dr. Friederich Wedell, describes his take on the Danish composers as follows:

The Danes maintain an entirely different approach to musical tradition. Their suggestions have all been for young pieces or pieces that have been created young, pieces that reference tradition and cultivate intellectual backgrounds.

Is this attributable to the uninhibited aesthetic approach of the Scandinavians ?

I think so. For example, Rune Glerup calls his piece Divertimento. This is curious since this genre of popular music à la the early classical era is rarely found in new music (laughs). On closer inspection it is actually deals with a work by Mozart. He tried to pick up on the qualities of lightness in the Divertimento KV 563. The Sinfonietta is employed very elegantly in a chamber music fashion according to timbre.

If the reference to Mozart concretely audible?

In a hidden and playfull way Glerup cheerfully quotes the rattling ground of the Finale and contrasts it with a kind of darker ‘night music’. This is somewhat reminiscent of Lachenmann's Tanzsuite mit Deutschlandlied. The Divertimento appears as a kind of small, absurd music machine.

Another example would be Christian Winther Christensen. He refers in Festmusik mit japanischem Geist und deutschem Akzent to a really terrible piece of music by Richard Strauss, the Japanese festival music that was composed in 1942 for the 2600 anniversary of the Japanese Empire. The hollow pathos Strauss is dismantled, blended with Beethoven's Ode to Joy and then faded over into real Japanese spirit.

The full interview (in German) can be found here