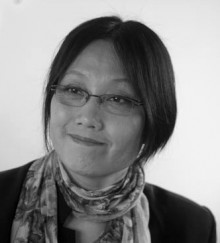 Liu Sola is a composer, a highly individualistic vocalist and also a major contemporary fiction writer.

After graduating from the Central Conservatory of Music with a degree in composition, she composed music for symphony orchestras, ensembles, solo instruments, as well as music for film, television, modern theater and dance productions. She created the first Chinese rock opera Blue Sky Green Sea with a libretto based on her own award-wining novella of the same name.

From 1988 to 2002, she lived first in London and then in New York, collaborating with Blues, Jazz, Rock, Rap, Reggae, and Club musicians as well as traditional and classical musicians, and gave performances world wide. In 1999, she returned to China, and with her band Liu Sola and Friends, gave ground-breaking performances at the Beijing Jazz Festival. The band has since been enlarged both physically and conceptually, performing as the first-ever traditional Chinese “big band” in Beijing in 2002; and in Berlin in 2003, as a fusion ensemble made up of traditional Chinese and American jazz-rock musicians. More recently, (as in a new concert Celebration of light and darkness - 2005), she has been devoting her musical attention to fashioning contemporary sounds from traditional Chinese instruments, while continuing to explore new vocal styles.

Theatre of Voices Edition is a publishing initiative founded by and under the artistic leadership of the singer and conductor Paul Hillier. Each publication is prepared carefully to meet the standards of professional choir singers and conductors of the 21st century.